There have been a series of conferences between the various OuXpO groups on the notion of set theory, compliment, and intersection. The question arose on how to illustrate the notion of compliment, so here is my take.

Compliment is everything other than the thing. Or as Wikipedia states: The compliment of a set A, are the elements not in A

The notation as stated alongside of the images:

A\B is everything that is not A

B\A is everything that is not B

Posted by open all the boxes at 19:00 No comments:


For fun, I have been making drawings that appear to have been made according to a constraint, alas no. The foremost consideration here, is of the aesthetic and the method is without the expected mathematical rigour. Simply cut and rearrange, however it does pay tribute to an OuPeinPo constraint, namely the Taquinoïde (or as we know it in England, the shuffle puzzle) by Jacques Carleman.
Posted by open all the boxes at 18:42 No comments:

the privileges of being an amateur 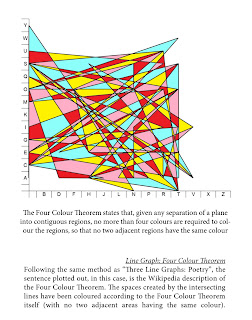 The privileges of being an amateur means that I can appropriate mathematical systems, notions, etc for my own purpose. But it is more than that of course. Here, I decided to test the four colour theorem against poetry, which resulted in this visual exploration.

More of this sort of work is on the graph theory page.

Posted by open all the boxes at 18:01 No comments:

Upcoming exhibition with the OuPeinPo 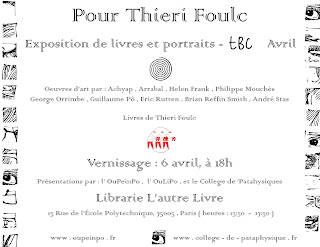 Draft flyer for the upcoming OuPeinPo exhibition. It was held in London in October, and will be travelling to Paris for a second showing in April. The dates are still to be finalised, but the vernissage is on April 6th. Santé!
Posted by open all the boxes at 17:44 No comments:

What was I doing for two years?

Posted by open all the boxes at 13:25 No comments:

Snowball is usually a poem in which each line is a single word, and each successive word is one letter longer...